A Home-Made Map Lead to Plunder on the High Seas!

Posted on October 1, 2011 by Blake Patterson 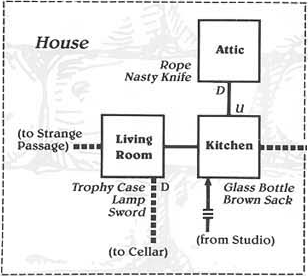 The other night Colette Bennett, a rather savvy freelance writer that works with us over at TouchArcade, tweeted a link to a Kotaku story entitled “The Delightful Home-Made Maps of the Zork Series.” Now, I won’t belittle my readers by explaining what Zork is, but suffice it to say that, in playing the game, you drew maps. And photocopied them. And shared them with schoolmates on occasion. It was all part of the fun and discovery of quality text adventure, so long ago.

Colette tweeted that the Kotaku piece threw her into a wave of nostalgia. It did, likewise, for me. It’s a lovely piece showing a range of maps from the basic functional to the lavish artistic.

While I’m eager to share this Kotaku story with any that may have missed it, the reason I am posting is to share with readers a hand-drawn game map from my own past. This is not a map that I, myself, drew, but it is a map that I put to rather good and frequent use, way back when. The map I speak of is a map to the classic adventure game Sid Meier’s Pirates!, drawn by my nearly lifelong friend Chris Bernick. (Chris happens to be the backend guy for AppShopper, with a good bit of TouchArcade backend work tossed in here and there.) 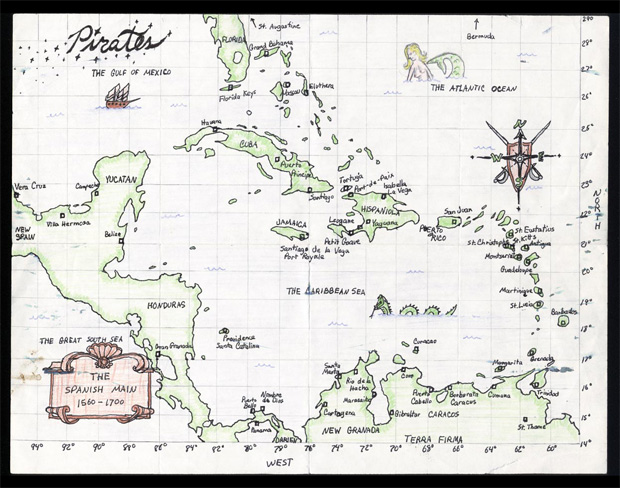 Chris is one of those artsy guys — well, perhaps moreso in the past. He did all kinds of drawing when we were in high school — with pencil and paper, airbrush, in Deluxe Paint II on his IIgs, etc. He is the guy who designed the logos for both MacRumors and my old website iPodHacks, as well.

So, Chris had Pirates! on his IIgs and I had just gotten Pirates! on the Amiga. What must have happened was that I lost the map that came in the retail package of the game that I had, earlier, purchased…or…something like that… At any rate, Chris drew (not traced) me a stylized, color map based on the pack-in original. He brought it over to my house late one night (we were neighbors) and, thanks to his handiwork, hours of fun on the high seas did ensue.

And I’ve kept the map all this time.

This entry was posted in Amiga, Apple II, Gaming. Bookmark the permalink.

4 Responses to A Home-Made Map Lead to Plunder on the High Seas!