Tempest and Jaguar and Nuon — Oh My!

I remember how great video games were when I was a kid. “Real” video games. I’m talking early ’80s. And I say “real” because, quite unlike the situation over the past 10 years, home computers and consoles were not anywhere near as able to toss around the sprites as the wonderful towers of electric sex in the arcade down at the mall. The good old fashioned arcade down at the mall.

When I think back to the magical feeling of looking around the arcade, amid the beautiful chorus of blips and beeps, for just the right game to play…and slipping a quarter in the slot…I get a little teary eyed. Yea, that was the stuff. And to the young folks out there (I’m an old fart of 36 years): what you call an “arcade” today is, sadly for you, an insult to the term. They just don’t make ’em like they used to. And people don’t really care that much anyway because they have a PS3 at home.

Of those magical golden-age games, one of the very best was Tempest. Atari’s first vector offering, Tempest is a frenetic, spinner-controlled shooter where the player controls a claw that rides the edge of various oddly-shaped 3D tubes and walls, shooting at enemies that approach from below. It’s just about perfect. And it’s just as playable today as it was back in 1981.

A few recent additions to my own, personal “Byte Cellar” illustrate my fondness for the game.

Not long ago I purchased a new-in-box Atari Jaguar, complete with Jeff Minter‘s (great photo here) psychedelic sequel to Tempest, Tempest 2000. It’s an amazing game that’s been ported to many other platforms, but the consensus is that none are as solid as the Jaguar original. Having played several of the ports, I’d have to agree.

An interesting thing about “the world’s first 64-bit console”–it’s controller was, as the Brits would say, fairly pants. It was large, sported a calculator-button array for game overlays (like the Intellivision controller), had no shoulder buttons, and featured only a D-pad for directional control. As the arcade original is controlled with a rotary spinner knob, the D-pad falls rather short of providing ideal game control. But, of course, being such a savvy chap, Jeff Minter realized this.

Jeff wrote in support for an analog rotary controller…one that did not exist. Neither Atari nor third party manufacturers produced such a controller in the Jaguar’s heyday. Jeff, as I understand it, hacked his own together by wiring an Atari paddle controller into a Jaguar controller. In the years since the Jaguar’s passing, a few small operations have offered modified Jaguar controllers with spinners wired into them for purchase. The best one I’ve seen is the Jaguar ChaosReins Rotary Controller.

A few weeks ago I ordered. It arrived. Gaming ecstasy ensued. 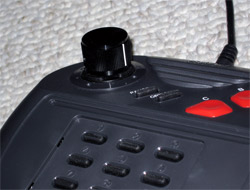 After activating the hidden controller mode in Jaguar 2000 by depressing the magic button combination across two plugged-in controllers, the already-amazing game jumped to a whole new level. My first game on the new controller nearly doubled my previous high score. Hats off to Jeff for doing the right thing and supporting the hypothetical!

But he didn’t stop there. Not long after creating T2K for the Jaguar, Jeff found himself working with VM Labs to create software for their in-development “Project X” system. I recall reading about the mysterious and promising Project X in Next Generation magazine back in ’96 or so. Well, Project X was released as Nuon, a gaming chipset that took a rather new approach to distribution: it was embedded in various DVD players to add not only gaming capability but also enhanced media capabilities like flexible zoom options, enhanced on-screen menus, visualizations for CD audio, etc. It was finally released in several DVD player models…but no one really seemed to care.

Most Nuon owners were likely unaware that they had access to a rare gaming gemstone–perhaps Jeff Minter’s magnum opus: Tempest 3000.

While Tempest 2000 was a rather psychedelic gaming experience, Tempest 3000 is like just way too many ‘shrooms. The colors just drip out of the screen, the tubes and walls flex and bend as if floating in a gentle wind, the yak bleats on the level jump caress your senses, and the action is as intense as ever. And, while I’ve not seen a hacked-up rotary controller for T3K, the analog stick featured on most Nuon controllers is fully supported, offering control far beyond the D-pad. 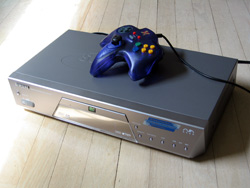 And, of course, I know all of this becuase, after becoming addicted to the gaming crack that is Tempest 2000 with a rotary controller, I went out and found a Samsung DVD-N501 “Nuon enhanced” DVD player (featuring a 54MHz VLIW Aries 2 processor) on eBay, complete with a three-game bundle including the holy grail itself. And if you’re guessing that I’ve dreamed more than once in the past few weeks that I’m teetering on the edge of a tube, dodging approaching Flippers and Spikers, you’d be correct. The bleeding eyes came as a bit of a surprise, though.

If you aren’t prompted to go right out and grab a Jaguar and a Nuon and settle down with lots of chips and Coke, then at least have a look at a few offerings you can try without getting off the couch. Stainless has brought Tempest to the Xbox Live Arcade for 400 MS Points (and they may soon be bringing it to the iPhone–let’s hope!). But, perhaps more interestingly, Jeff Minter himself has produced a Tempest-inspired game (that as he reminds players “is not Tempest!”) called Space Giraffe. And, though it seemed impossible, Space Giraffe is even more psychedelic than T3K–it’s sort of like acid-induced psychosis (that’s what happens when our giraffe is in another castle, after all). It’s definitely worth the 400 MS Points. And for no charge at all, look at the XBOX 360’s music visualizer–it’s Jeff’s light synth handiwork all the way.

UPDATE 1/12/2019: A couple of months ago I grabbed a Playstation mouse on eBay in order to properly play the classic Alien Resurrection. It’s lovely, and so is Quake II played with the mouse. Since then, I found a list of PSX games that support the PS mouse and among the titles is Tempest X3 for the Playstation. It’s a conversion of Tempest 2000 for the Jaguar (and it actually has an unlockable Tempest 2000 mode hidden away!) which I find to be solid, but not quite as nice as the Jaguar original. I gave it a spin and I can tell you that the mouse control is amazingly good, as you can imagine. Next to the Jaguar with rotary controller, it’s the best way to play the a Tempest sequel.

This entry was posted in Atari, Gaming, Other Platform. Bookmark the permalink.

15 Responses to Tempest and Jaguar and Nuon — Oh My!