Geek Classic “WarGames” Comes Back to the Big Screen! 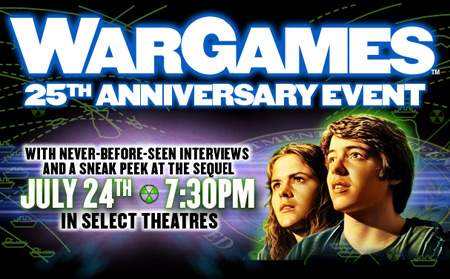 That’s right! It’s been 25 years since we sat in that theater and saw John Badham’s “geek’s wet dream” masterpiece WarGames on the big screen. A quarter of a century. I was 11 years old. And even though I’d had my first computer for about half a year at that point, it was primarily responsible for permanently burning into my brain a boundless, lifelong lust for computer hardware. It solidified me as a geek, and for that I thank it. And as you may be suspecting…I’m not the only one who drank the Kool-Aid…

And the best part? We’ve all got one more chance–one single chance–to be a kid again, sitting there in awe before the silver screen. On July 24th at 7:30pm in theaters all around the country, WarGames will be projected upon the silver screen once more. Tickets are on sale now at the event site. (I’ve got mine!) What a splendid night it will be. It’s kind of like Christmas, really.

The event runs for 2 hours, 20 minutes and includes the geek classic WarGames along with previously unseen interviews and a preview for…get ready…the forthcoming sequel to WarGames, WarGames: The Dead Code. Only today did I learn of this sequel. And it excites me. Though it’s a direct-to-DVD release. And it looks fairly lame. But hey–who are we kidding? We’ll all own it.

I’m pleased to be able to share this info that I happily stumbled upon in the Twitterverse. Don’t miss your chance to relive the dream. And for those geeks who’ve yet to experience this wonderful piece of cinema: thank all the powers in the universe that you can enjoy it for the first time as God intended.

And for a really nice WarGames treat, have a look at this most interesting story [update: via Wayback Machine] of the IMSAI 8080 used as the prop for David Lightman’s home computer setup. It’s a great read.

4 Responses to Geek Classic “WarGames” Comes Back to the Big Screen!