In my last post, I mentioned that I had rearranged my basement computer room to make room for a new addition to the Byte Cellar. Well, my latest acquisition finally arrived: a TRS-80 Model 4, my first Tandy / Radio Shack computer. 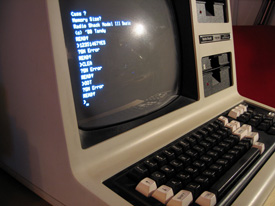 My first memories of the Model 4 are from way back in the summer of ’83. There was a Radio Shack in the mall my mom used to frequently drag me to when I was but an 11 year old geek. This one day, this particular Radio Shack had setup a computer display in front of the store, out in the mall. I sat down at a Model III and fiddled with it a bit. I was using a TI-99/4A at the time and recall really liking that Model III. I asked the woman running the display all about it. She mentioned that the Model 4 was about to be released and that, if I was going to jump, it would be better to wait. Well, I wasn’t about to jump on anything, but it was the first time I’d heard mention of the Model 4.

A big part of why I wanted that TRS-80 is because its form-factor always, to me, represented the image of just what a computer should look like. Its design is perfect, for what it is — screen, drives, keyboard all in just the right place. I wanted to sit in its presence and feel its keyboard and bask in the glow of its 12-inch monochrome CRT. So I bid and won the eBay auction and in the mail it went. And that’s where the adventure began.

This unit was shipped to me by way of the U.S. Postal Service. I’ve often said that J. R. R. Tolkien’s immortal classic The Lord of the Rings could have been a lot shorter if it had simply been decided at the council of Elrond that the ring would be shipped to Morder by way of the USPS. There is no question that it would have been utterly destroyed. So, as you may have guessed, damage ensued.

Upon initial power-up, I discovered two problems: several keys were not registering and the system was not recognizing its floppy drives. Upon opening the case, the cause of the problems were quickly apparent. Jostling during shipping caused the floppy drive controller’s power cable to come loose. Quickly remedied. A look at the bottom of the keyboard, however, revealed a more complex problem. It seems that somewhere along the line a postal worker dropped the package from the top of a mail truck…or something like the same; something caused the TRSDOS document binders to impact the keyboard hard enough to thrust the mid-keyboard support peg through the keyboard’s PCB. It wasn’t pretty. Happily, soldering three bridge lines to the proper key contacts got the keyboard back in working order.

As regular readers will have already guessed, the first thing I did was to set up the Model 4 as a text terminal to my Mac Pro. Omniterm Plus, a hand-made null modem cable and a few magic words in the OS X terminal was all it took. Using vintage machines in this way gives me such a great excuse to finger their keyboards regularly. Some people are serial killers — I’m a serial terminaler, it seems, as this is my fourth such project (one, two, three).

That said, moving through the various TRSDOS and CP/M apps I’ve got on hand is most interesting. I’m expecting to have much fun with this machine in the coming months.

Have a look at my photo gallery as well as the “TRS-80 Love” Flickr group I setup.

This entry was posted in Other Platform, Serial Terminal. Bookmark the permalink.