Newton eMate 300 As A Serial Terminal

Posted on September 11, 2007 by Blake Patterson 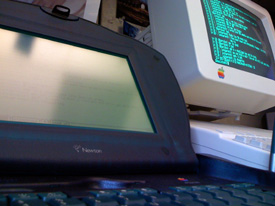 Ok, my three regular readers may be asking themselves, “didn’t we just read this story?” They would be mistaken in thinking so, however. Back in late July I described the manner in which I configured my Apple //c to serve as a dumb terminal, tied via serial link to my Mac mini. In researching the project, I ran across a story of a user who had put an Apple Newton eMate 300 to similar duty on his Sun box. Being an eMate owner myself and having a vacant Mac-style serial port on my dual-port Keyspan USB-to-serial adapter, I felt I must get this going as well.

And today, I have. Have a look at the photos.

It’s hard to get as excited about this project as the Apple //c terminal since, well, I just did it with the Apple //c and I didn’t have to splice cables together and since – hey, let’s not fool ourselves – the eMate is a 25MHz ARM 710a (RISC)-based machine while the //c is powered by a mere 1.02MHz 65C02. But it’ still worth a post, I feel.

No, this won’t be a permanent office fixture. Just a little experiment. Sadly, the eMate will soon resume its typical roll as a paperweight to hold down my Apple Lisa 2 in the home “Byte Cellar.” Still – it made for a pretty interesting little exercise.

This entry was posted in Handhelds, Serial Terminal. Bookmark the permalink.

6 Responses to Newton eMate 300 As A Serial Terminal