I’ve always loved “gravity games.” The various Lunar Lander incarnations are great fun to me. Asteroids, more an “inertia game” than a “gravity game” in truth, has a similar feel and is similarly fun. As such, a certain screenshot in the Commodore 64 issue of Retro Gamer magazine (#30) caught my eye the other day. It depicts what looked like a gravity game, and some digging on the net showed me that’s indeed what it was – a game known as Thrust. It was ported to various systems of the period (even the Vectrex!). I grabbed the C64 version and have been having a blast with it through VICE on my Win 98SE P3 setup for emulation.

As it turns out, Thrust (see screenshots here) is a game that was originally written for the BBC Micro / Acorn Electron and released in 1986 by Firebird. It’s based on Gravitar from Atari, a not-especially-popular arcade game (a gravity game!) released in 1982. Thrust, a much better game, basically goes like this: In a setting similar to, but more complex than, a Lunar Lander scenario, you must capture a pod with a tractor beam (which acts, physically, like a stiff rod when activated) and pull it into space. There is a dramatic feel of gravity and inertia as regards both your craft and the attached pod, making for a rather “realistic” feeling game. The difficulty is in navigating narrow, subterranian caverns with this pod attached to your craft by what feels like a metal rod. Great fun. 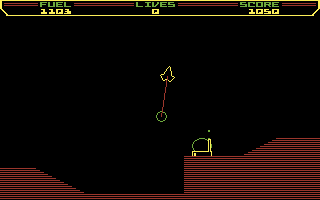 Thrust, doubtless rather flattered, has apparently inspired a variety of remakes and adaptations, including four for the Amiga (Gravity Force, Rotor, Zarathrusta, Fly Harder), Solar Jetman for the NES, and a number of PC remakes (that just don’t feel as good as the originals, pixellation aside). I’ve just grabbed the NES title and have been having lots of fun with it on my GP2X via GPFCE and can’t wait to track down these various Amiga games and give them a whirl on my A2000.

Thrust. If you missed this one like I did, it’s not too late to feel the goodness!

UPDATE [9.3.2007]: Ok, I’ve got to say that the aforementioned Vectrex version of this game has got to be the best version out there. It’s just gaming heaven. I’m loving it. So – go get yourself a Vectrex and take hold of the Thrust cartridge. Some of the best gaming I’ve experienced. Worth the purchase of a Vectrex just for this title. My $.02.

UPDATE [12.11.2008]: ng:moco has just released Dropzone for the iPhone. Dropzone is a Thrust remake with a bit of Geometry Wars thrown in. See our review over at Touch Arcade. It is a superb game.

This entry was posted in Multi-Platform. Bookmark the permalink.

10 Responses to “Thrust” from Firebird Software