Got My Micro Mate 520 STation for Atari ST!

Back in the fall of 1986 I moved from an Apple IIe to an Atari 520ST. I quite enjoyed that ST. One particularly nice and uncommon thing about my ST setup was the system stand I found and ordered out of STart magazine, or some such. It was a Micro Mate A520 STation. It was a metal enclosure that housed two 3.5″ floppy drives, all system power bricks, and supported a screen. It was raised, so the Atari ST kind of tucked under it, making for a really sharp overall layout. I’ve not reacquired an ST for my own “Byte Cellar,” and swore I never would, unless I could find this excellent and very hard to come by stand.

Well, I found one. 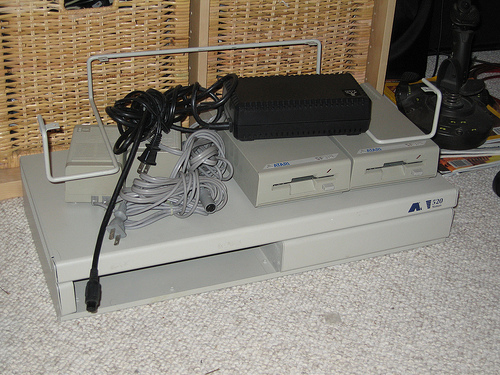 I posted my search for one on Google Answers back in October 2004 and heard nothing – until a couple of weeks ago. Someone came across one of these units and wanted to sell it on eBay, and in doing research on the unit, ran across posts regarding my strong desire for a 520 STation. He e-mailed me with a heads up on the auction and voila! Today, February 13, 2007, I finally got my hands on a STation [pics: 1, 2, 3] (bundled with two Atari SF314 720K floppy drives), having not laid eyes on one in 20 years. Score!

An Atari ST can’t be far behind…

UPDATE [3.18.2007]: Indeed, it was not. I’ve just updated this article to reflect new photos which show the STation filled with a newly acquired Atari 520ST. :-)

3 Responses to Got My Micro Mate 520 STation for Atari ST!