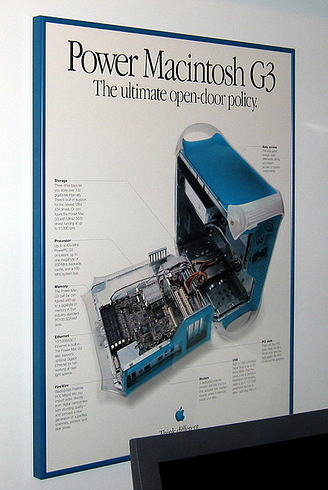 My first first Mac was an original Macintosh (128K), which my parents purchased for me back in 1985. My second Mac was a Mac LC which I got in late ’91. After about a year, it was Amigas and PC’s for me exclusively until I was lured back to the Macintosh camp by Apple’s purchase of NeXT (read: NeXT’s takeover of Apple) and their decision to use the NEXTSTEP operating system as the basis for the future Mac OS. I made this decision during late summer of ’98 and from there it was a matter of waiting for Apple’s new, rumored Power Macintosh which would feature styling aking to the recently introduced iMac. After a five month wait, the “Blue & White” Power Macintosh G3 was released at MacWorld Expo San Francisco in January of ’99.

The unit’s ‘Yosemite’ motherboard was housed in the ‘El Capitan’ tower enclosure, a most stylish and striking mini-tower case that was the same color as Apple’s “blueberry” iMac, released at the same event. The ‘El Capitan’ was the first of the swing-open style towers, a design that carried into all following G4’s and offers arguably the most accesibility of any tower case ever designed. I ordered one the day it was introduced. I got the top of the line unit, featuring a G3 processor running at 400MHz with 1MB of 200MHz L2 cache. It was a notable upgrade from my Windows 95-running, AMD K6 233-based PC. Anticipation of the unit caused me to setup a “PC to Mac” website, which I later molded into Blake’s Blue & White Page (which I never took very far). The machine ran OS 8/9 wonderfully, if proving a bit lightweight when it came to running the first versions of Mac OS X when it finally arrived (though I hear the B&W’s run Panther quite nicely). It served me well for two and a half years, when we parted ways as I moved up to the top-end machine announced at MacWorld Expo New York in the summer of 2001, a “Quicksilver” dual G4 800. The trusty B&W G3 fetched $1,100 on eBay (monitor not included)—try to find that kind of value retention on a two and a half year old PC….

At any rate, the point of this post is that I stumbled across an eBay auction for a mint condition, still-in-tube Apple poster promoting this great machine and I had to grab it given the special place in my heart for this machine. I think the framing turned out great. It now hangs in my own “byte cellar,” the basement computer room. Have a look for yourself!