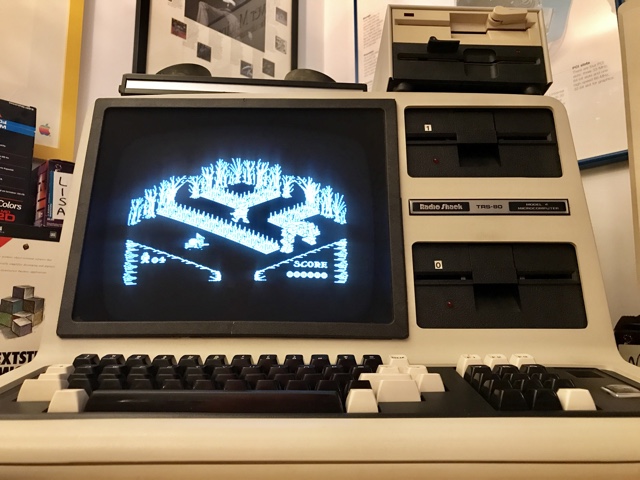 The TRS-80 Model 4, like the Model 3 which preceded it, is a curvy, all-in one computer with a 12-inch monochrome text-only display flanked on the right by two full-height 5.25-inch floppy drives, one atop the other. As a kid, nothing to me looked more COMPUTER. I just loved fiddling with them in the Radio Shack down at the mall back in the early ’80s. Ten years ago I won an eBay auction for one, put it on the desk, wired it up as a serial terminal to my Mac Pro, but before long I put it on the shelf to make room for other systems as I wasn’t really doing much with it. Fast forward 10 years and we’ve got these nifty little WiFi232 devices, and the like, as well as inexpensive flash-based floppy and hard disk emulators. So, the Model 4 came down from the shelf and is currently getting some long-needed love. And in my first gesture of love I have lavished the text-only machine with a full 640×240 pixel graphics display, thanks to Ian Maveric’s Improved Grafyx video board.

What inspired me to pull the Model 4 down off the shelf were a number of tweets from telnet BBS pals showing the system being put to great use logged into various systems across the web. Some of the screenshots showed the machine rendering ANSI “graphics” onscreen and I looked into it. As I suspected, the stock Model 4 is not capable of taking on a custom character set such as is needed by ANSI emulation, and I discovered the system had been equipped with a graphics board and the ANSI-supporting terminal program, ANSITerm, was rendering “text” to a graphics display; the character set was basically a software font.

And I just had to go there. 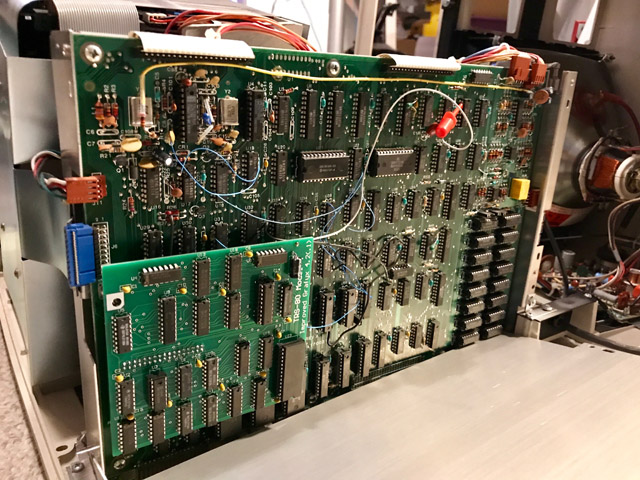 The graphics board in question is basically a modern remake of the Model 4 Grafyx Solution video board by Micro-Labs, released in 1984 at a price of $199 USD. It was the only third-party competitor to the Radio Shack Model 4 High-Resolution Board, which was released in late 1983 at a price of $249 USD. Both boards gave the TRS-80 Model 4 full-screen 640×240 pixel graphics, with every pixel addressable. While sporting only 20K RAM compared to the Radio Shack unit’s 32K (19K is required to render a 1-bit, 640×240 screen), the Grafyx solution was cheaper, 25% faster, could render text and graphics at the same time, and apparently more popular.

Ian Maveric, a TRS-80 hobbyist / maker / personality from down under, currently makes several TRS-80 peripherals, one of which is a remake of the Micro-Labs board. So, I ordered an Improved Grafyx v4.2(.1) as well as a bundle of software supporting the high resolution graphics modes from Ian’s website. As I waited for it to arrive I sourced a 360K 5.25-inch floppy drive for my 5×86 DOS PC to use in conjunction with DOS-based TRS-80 emulators to write out physical floppy disks for the Model 4 from disk image files. (I had to go through three drives before finding one that functioned…but the setup works just as I’d hoped.) When Ian’s package arrived I cracked open the Model 4, performed the effortless install, and was off to high-resolution land!

In the associated video (forgive the poor illumination, the Byte Cellar is a place shrouded in darkness) I demonstrate just a few of the high-resolution titles I recently received, as well as the first version of an old favorite that long-time readers may recall me writing about a few times in the past: Time Bandit. (Note that Time Bandit does not support the Grafyx board, but runs in the 128×48 block text mode that is what most TRS-80 users could ever call “graphics”.) It’s interesting to note just how responsive the Model 4 command line and disk system are, in the video.

I am having loads of fun with the newly-upgraded Model 4 — playing games, downloading programs, BBSing, and the like. So, what’s next? Well, Frédéric Vecoven FreHD hard drive emulator (see demo video) plus custom bootmenu BIOS looks pretty darned appealing. I think it won’t be long before I reach back out to Ian for an order and this Model 4 is “hard disk”-based. Thanks, Ian!

This entry was posted in Tandy / TRS-80. Bookmark the permalink.