As My Daughter Turns Ten, A Look at the Technology Then and Now 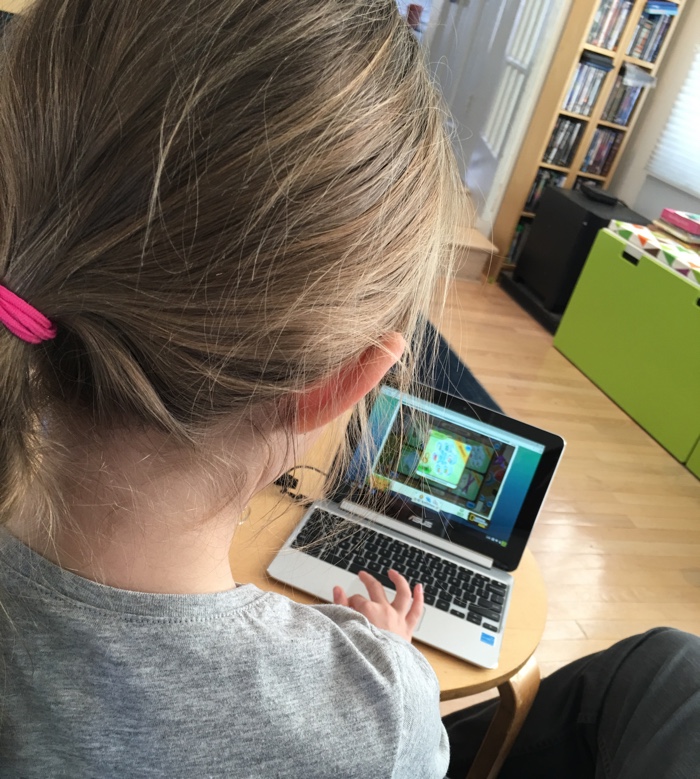 On May 3rd, my daughter turned 10 years old. This is something that is nearly impossible for me to actually believe, given how rapidly the decade has flown by. It really does feel like she was born yesterday. (Or last week, anyway.) I could ramble long on this feeling, but it would be difficult for readers to endure, I think. At any rate, at this milestone I am feeling very proud of the person that she has become, while also feeling fairly old. And reflective.

In reflecting upon these past ten years, I thought back to where I was in the world at the age of 10, and the retrocomputing geek within me began to compare the present day to day routine of my daughter, Rory, to my own routine 24 years ago, with an eye towards the state of technology. So, I thought I’d write a little about it, in an admittedly not-so-focused fashion.

When I turned 10 in May 1982 I was just finishing the fourth grade (as she is). School days involved textbooks, worksheets, notebooks (picking the right Trapper Keeper was crucial), and pencils (we weren’t allowed to use pens yet). There was a big black slate chalk board at the front of the room and occasionally the cherished TV cart would be wheeled in so that we could watch an educational videotape. Classwork and homework were done in our notebooks, worksheets filed away in the side pockets. After getting home from school I 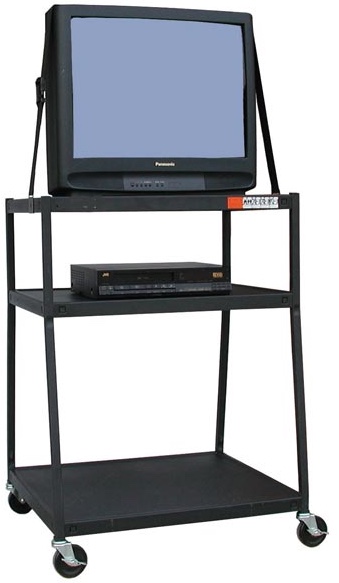 would sit down on the living room floor, in front of our aged 20-inch color TV, and play a few rounds of PAC-MAN, Demon Attack, and Pitfall on my Atari VCS. I might ride my bike along the gravel lane where we lived and maybe play on our beach or out on the pier.

I was, then, seven months away from owning my first home computer, a Christmas gift, which would turn out to be a 3MHz TI-99/4A featuring a 256×192-pixel display with 16 colors onscreen and 16K (Kilobytes) of RAM, which cost $300 (it was over $1,000 when it originally launched). The only storage available to me was by way of cassette tape.

Seeing any sort of computer anywhere around town at that time was a rare thing and an occurrence of which I always took particular note.

My 10 year old daughter’s school days involve textbooks, worksheets, notebooks, pencils (shes not allowed to use pens yet, either), and also laptop computers — Chromebooks. There is a large whiteboard at the front of her classroom, as well as a Smart Board which combines a camera, a projector, and a laptop computer to enable the teacher to demonstrate and “write” on either the computer or the projected computer-generated image on the wall, the end result being saved for later review. There are no slate chalkboards to be found anywhere in her school. All of the writing assignments the students are assigned are done on the Chromebooks. One is provided (in-classroom) for each student, and we purchased an identical unit for my daughter to use at home, an ASUS Flip C100 (which doubles as a touchscreen tablet). It cost $249 and features a quad-core 1,800MHz ARM-based processor, a 1280×800-pixel display with 16.7 million colors onscreen, 4096MB of RAM, 16GB of flash storage, and integrated wireless networking across several protocols.

She does her writing using Google Docs, and some assignments need to be media-rich. These she does using Google Slides, a PowerPoint-like web application. She often scours the web for the right image or factual research to complete these projects, and her work is stored in Google Drive 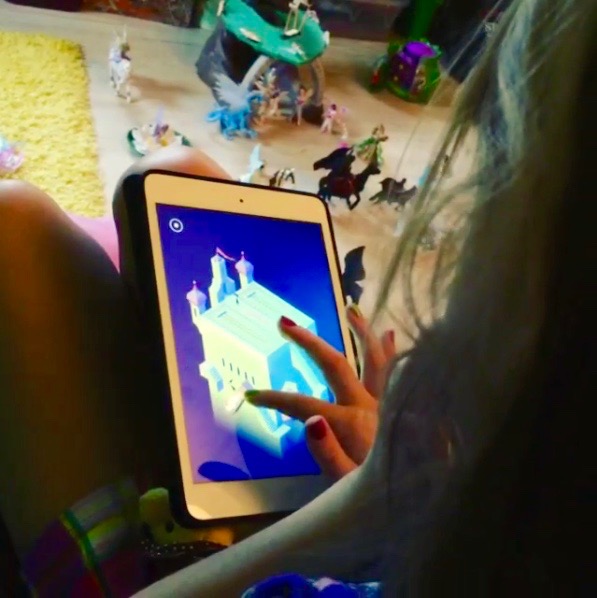 where she can pick it back up at home right where she left off at school. I give her a hand when it comes time to print on our laser or color inkjet tied to my iMac.

Rory has her own (non-activated) iPhone 4S that I handed down to her and we have several iPads that we share as a family. She loves to play Temple Run, Monument Valley, Jetpack Joyride, and a little Minecraft on them when she’s not image searching for “baby pigs wearing hats” or “tiny kitties cuddling.” As well, her Chromebook is not just about schoolwork; she has logged many hours into Nat Geo’s Animal Jam, an MMO of sorts. It’s a favorite of hers and her friends at school who regularly meet up in the game.

On that TI-99/4A that I received for Christmas at age 10, I played Parsec, Munch Man, AntEater, and other TI standards on 12K ROM cartridges. The TI came with no networking hardware at all, so I didn’t play any online games — not that any existed for the machine. In fact, while I was playing those simple games in 1983, the Internet, as named, was launched. 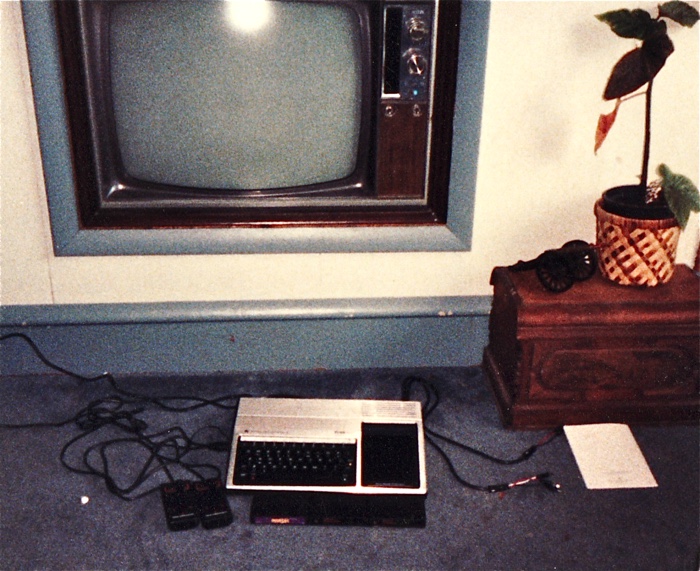 It wasn’t until the following year after getting that TI-99/4A that my parents agreed to buy me expansions for it. We purchased the Peripheral Expansion Box complete with a 32K RAM card, a disk controller card and 5.25-inch disk drive, and an RS-232 / parallel interface card. I believe the 32K memory card alone cost $300. Right after that, my dad saw an on-sale sign at an electronics shop on his way home from work one day and brought home my first printer, a Smith Corona TP-1 that used a daisy wheel. Great text quality in a single font, no graphics. I began using the TI system to write school reports in the 6th grade, using TI Writer, which  supported 80-column text lines, only 40 of which were visible at once.

Using a very loose reckoning, just looking at cores and clockspeeds, one could argue that my daughter’s Chromebook has 2,400 times more CPU horsepower than the computer I was using around her age. It also has about 87,500 times more RAM than that trusty old TI (after its memory expansion to 48K). And, of course, there’s the modern GUI, fonts, high-resolution true-color graphics, and the rest it has going for it.

I used PowerPoint for the first time on the job at CSC on a Pentagon Missile Defense contract in 2000. The notion of using that application, or online gaming, or any of the hardware that my daughter uses in her daily life, when I was ten years old, pretty much blows my mind.

It’s obvious to me that the technology in her classroom, and in today’s world overall, engages her and promotes learning and exploration far beyond what I had at my disposal at her age. I have always found it exciting to observe the evolution of computer technology as the years pass by, and I remain excited for what’s to come — for the both of us.

This entry was posted in Just Rambling, Other Platform, TI-99. Bookmark the permalink.

6 Responses to As My Daughter Turns Ten, A Look at the Technology Then and Now