My First Computer Thought It Was a Sewing Machine

I’ve shared many stories of my early adventures in computing on this blog over the past nine years, but it recently occurred to me that one of the most bizarre details of all, I’ve never mentioned. While I have spoken of receiving my first home computer on Christmas morning, 1982, I never mentioned that it was purchased at, of all places, a Singer sewing machine store at the local mall. In retrospect, that seems pretty strange…

To back up a bit, I got an Atari VCS for Christmas in 1979 (and have no idea where my parents purchased it). I didn’t do much with it until ’81, however (it started out on a black & white TV), but by ’82 I was getting pretty heavily into gaming. I’d go to the local K-Mart, BEST, or Toys “R” Us to check out new cartridges, and I’d see the various retail home computers — Atari, Commodore, and TI — outclassing the VCS with their game demos. Their keyboards and BASIC and other things that made them “real computers” started to appeal to me in a big way, and I began to urge my parents towards getting me a home computer.

My folks came to see the merit in it and it seemed that Christmas would be the time. So, I spent a good bit of time fiddling with the various systems I saw in the aforementioned stores we frequented — Atari, Commodore, and TI — to try and make up my mind about a system to go for.

During this time, my mom would take 10-year-old me with her twice a week, more or less, to the local mall, Coliseum Mall in Hampton, VA. I loved that place. My mother was a “housewife” at the time and sewing was a big thing for her. As such, we’d often end up in the Singer sewing machine store where she’d shop for thread or other sewing supplies. Now, oddly, it was around this time that this Singer store started selling computers. 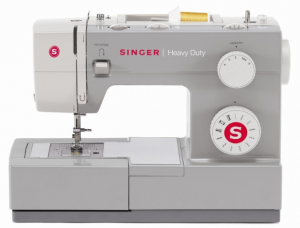 This little sewing machine store filled with reams of fabric, pattern kits, and doily-looking things, all of a sudden setup a display along the back wall featuring a Commodore 64 and a Vic-20, an Atari 800, and a TI-99/4A. (As I recall, the Atari 800 was too expensive, but they also sold the Atari 400.) As a regular customer, my mother was friendly with the woman that ran the shop — Sandy somebodyorother — who offered to give us a bit of a deal on the sale if we purchased from them. Christmas was approaching and, so, I spent weeks walking around clutching the BEST catalog and computer pamphlets, furiously trying to decided which system to ask for. I recall a few of the variables I was tossing around at the time. PAC-MAN looked the best on the Atari 8-bit, and I recall thinking it would be impressive to wave in front of my 2600-using friends (we played a lot of 2600 PAC-MAN in those days…oy…). I did not like the look or physical feel of the C64 or VIC-20, so they were right out (interestingly). The shiny, aluminum TI-99/4A looked the most futuristic and “computery,” but Munch-Man was a pretty weak take on PAC-MAN (this was before Atarisoft cranked out a superb PAC-MAN for the TI), though Parsec and its use of the available speech synthesizer was impressive. It’s interesting to note I never even ran across an Apple II or IBM PC, as they were not found at any of the more general retail stores we frequented. And, at that point, they would have been price prohibitive. 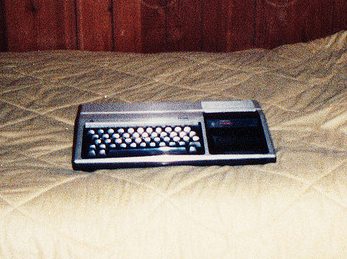 In the end, I asked for the TI-99/4A and its speech synthesizer module and, on Christmas morning, hooked it all up to the TV in the den for the first time.

The Singer connection didn’t just end with the purchase of the computer, however. We learned in early ’83 that a woman from the local TI-99 users group, The Peninsula ’99ers (I think it was called – I became a member), was teaching classes on TI BASIC on the weekends in a back-room of the Singer store at the mall. Her name was Judy North and she and her son were huge TI fans. (Here she is sharing a tip in the Feedback section (page 8) of the November 1986 issue of MICROpendium [PDF].) I signed up and ended up having a lot of fun sending sprites around the screen as part of those small class sessions. Sometimes there were even Krispy Kreme donuts. Sometimes.

As months passed, I wanted to do more with BASIC and, so, I sold a pretty shoddy motorbike with which I used to tear up the dirt lane in front of our house for the funds to buy the TI Extended BASIC cartridge ($99). And, for my 11th birthday in the spring of ’83, we purchased more hardware from the Singer store: the TI Peripheral Expansion Box, a disk controller card, a 5.25-inch floppy drive, and a 32K RAM expansion card.

By around this time, the computer displays at the Singer store had increased in size and number, taking up perhaps a third of the floor.

TI soon pulled the plug on the 99/4A, which was getting trounced by the competition (mainly the VIC-20), and the TI displays disappeared from the store. Over the next few years, however, more systems and peripherals went on display there. One of particular note that I recall was the Sanyo MBC-550, a loose PC clone that had some interesting graphics hardware. (It had its own version of Time Bandit.) That Singer store is the only place I’ve ever encountered one in person. 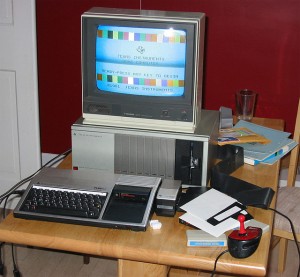 In 1984, what with TI out of the home computer market, I put an ad in the local newspaper, The Daily Press (interesting story, there…), and sold the TI system, moving on to the newly-released Apple //c. I have since, however, reacquired a full TI setup and enjoy playing around with it from time to time.

In prepping for this post, I carried out a number of searches to try and find other accounts of computers being sold through Singer stores — and came up empty-handed. I did discover that in the the ’60s Singer acquired Packard Bell, and later acquired a minicomputer corporation, but I found no mention whatsoever of computers being sold in their retail stores, either as part of a corporate history or by way of a user account. And that vexes me.

I’d love to hear if anyone else out there ever saw a computer display in a Singer store in the ’80s, anywhere in the U.S, or if anyone happens to recall that Hampton, VA store that I frequented 30 years ago. Surely I’m not the only one who got their first computer from so unlikely a vendor.

UPDATE: See more (recovered photos and info) about this system in my 2016 post, “33 Year Old Roll of Film Offers a Glimpse of My Vintage Computing Beginnings“

This entry was posted in TI-99. Bookmark the permalink.