Apple’s “Dynabook” Birthed the iPhone, It Turns Out…

Back in late January I posted my thoughts on the iPad and the change that it will bring. It was my last post, actually; I thought I’d let it sit out there on top for a while, in hopes that a few eyes might find it. I’ve since gotten my own iPad, of course, and my feelings about the significance of the device have only grown stronger. But, that’s not what this post is about. No, I’ll share some of my own iPad adventures soon enough, but right now I want to connect a piece of that last post with certain comments recently made by Steve Jobs as he shared some of his thoughts in a chat with Walt Mossberg and Kara Swisher at the D: All Things Digital conference. 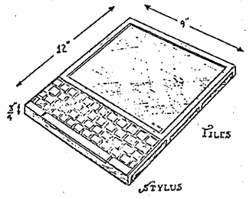 A main theme of my last piece dealt with the Dynabook, Alan Kay’s vision of a truly personal computer — a tablet that would function as a person’s true assistant. At the unveiling of the iPhone during the Macworld 2007 keynote (which I’m lucky enough to have attended), visionary Jobs approached visionary Kay and asked what he thought of Apple’s new device.

When the Mac first came out, Newsweek asked me what I [thought] of it. I said: Well, it’s the first personal computer worth criticizing. So at the end of the [iPhone] presentation, Steve came up to me and said: Is the iPhone worth criticizing? And I said: Make the screen five inches by eight inches, and you’ll rule the world.

In his recent chat with Uncle Walt at D:, Jobs revealed that it was actually the notion of a tablet that got the multitouch / iPhone OS ball rolling.

Walt: So when you built this OS, you did it in a phone. Why? Why not a tablet first.

Steve: I’ll tell you. Actually. It started on a tablet first.

Steve: I had this idea about having a glass display, a multitouch display you could type on. I asked our people about it. And six months later they came back with this amazing display. And I gave it to one of our really brilliant UI guys. He then got inertial scrolling working and some other things, and I thought, ‘my god, we can build a phone with this’ and we put the tablet aside, and we went to work on the phone.

When I saw this, it just hit me just how hard it must have been for Steve Jobs to keep mum about the tablet-oriented genesis of the iPhone project upon hearing Alan Kay’s reaction to the device.

It’s rather interesting how this industry works — and things are getting more interesting by the moment. Right now we’re in one of the most pivotal moments of change since the invention of the microprocessor. Take a look around, folks, and don’t miss it…