Can A Computer Make You Cry?

Posted on September 30, 2009 by Blake Patterson

I started life on a TI-99/4A. After a year or so I sold it and got what I considered my first “real” computer, the just-released Apple //c in the first half of 1984. (No offense to TI-99 aficionados intended.) In that time, the most compelling home computer game studio was Electronic Arts. Back then they spoke of their developers as “software artists” and produced a series of ads that depicted them as rockstars. Their game packaging even looked like an LP sleeve. I recall those ads well and they fed into the mythos that was the Electronic Arts game studio. I had so much fun with Archon, Pinball Construction Set, Music Construction Set, and Seven Cities of Gold in those days it’s silly. 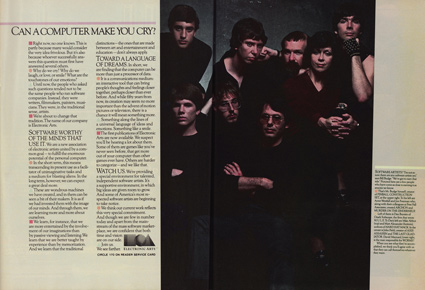 I recall the ads in magazines of the time. EA was such a great force in the home computing scene back then. Neil Young of major iPhone game studio ngmoco often speaks of those heady days of garage programmers and true, indie, creative gamemaking.

Three or four years ago I decided I really wanted to grab one of the EA rockstar / “We See Farther” / “Can a video game make you cry” ad posters for the wall of my own personal Byte Cellar. I looked high and low for quite a while, but found none. Until, one day, I learned that a regular on the Macintosh IRC channel I’ve frequented for the last 11 years had just such a poster. I attempted to purchase it from him repeatedly, but he never wanted to sell. 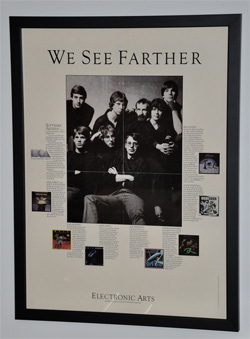 Thankfully, he was willing to part with the poster. I jumped at the chance. The poster came as a fold-out in the November 1983 issue of Electronic Fun with Computers and Games magazine. He sent me the poster and the magazine it came with.

I was quite happy to finally have acquired said poster and was quick to get it framed and hung on the wall. It was several weeks before I took a look at the included magazine, however. But the magazine, it turns out, might be the biggest treasure of all.

I mentioned that I started out on the TI-99/4A. It was my first computer and the one on which I learned BASIC. I used to buy this or that computer magazine at random, hoping to find a TI-99 game to type in and play. I was 11, way back when.

One day I bought this magazine that had a pretty solid side-view shooter involving aircraft and an aircraft carrier. It was known as Pearl Harbor by Jerry Hunter. I was quick to type it in, save it on tape, and spend hours enjoying its arcade action. Good times, way back when. 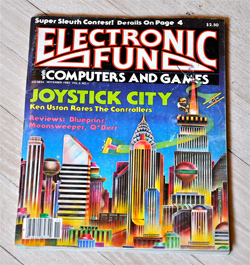 Imagine my surprise when I began thumbing through the pages of the magazine sent to me by this IRC pal and recognizing articles and advertisements. And right there, at the end, was the program listing for Pearl Harbor. This is that magazine — the only issue of that particular magazine that I ever purchased — which contained the game I so enjoyed in my meager, early days of computing, back when typing it in was half the fun. [ Update: In October 2017 I made a post with far more detail about Pearl Harbor — I even contacted the author for a chat! ]

I paid dearly for said magazine and poster, but feel it was well worth it. I consider the pair to be one of my most precious retro finds. It seems it’s all about getting back to those golden days. Here, it seems, I struck a goldmine of nostalgic bliss.

4 Responses to Can A Computer Make You Cry?