Let me first say “no.” I am not in the process of transforming this retro computing blog of mine into Byte Cellar: All Things As Mac OS X Dumb Terminals. Honest!

But yes, I do seem to suffer from a woeful addiction. I admit it to you, my readers. (I can feel a weight lifted already.) And the undeniable evidence of this addiction? I’ve wired up yet another vintage system as a dumb terminal to Mac OS X. Hey — third time’s the charm, right? 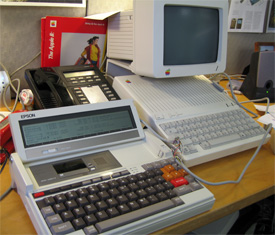 First, a bit about the vintage system in question. Both of my regular readers may recall that about six months ago I was intrigued by what I heard of Earl Evans’ interest in and restoration efforts concerning one of the first laptop computers, the Epson PX-8 “Geneva” (circa 1984), on his Retrobits podcast. I remembered the unit well thanks to a review I read of it back in 1984 in an issue of Computers & Electronics magazine. In fact, I still had the magazine on hand so I dug it out and scanned in the review, along with a nice two-page Epson PX-8 advertisement. I was pleased to hear back from Earl who rather enjoyed having the review to read and let me know that new-in-box PX-8s were still available for purchase from Star Technology! And, of course, I did.

The PX-8 is a great little machine. It weighs 5 lbs, features an 80-character by 8-line LCD display with angle adjustment, is powered by a Z-80 compatible CMOS CPU, runs CP/M 2.2 out of ROM and runs for 15 hours per charge. It comes with several extremely basic apps on-board (including BASIC, actually), and additional programs can be added by way of pop-in ROM chips or via floppy, if you’re fortunate enough to have gotten your hands on an elusive FP-10 floppy drive. Epson sold the PX-8 for $999 back in its day.

I brought the unit in to the office some time ago to fiddle with occasionally during free time at lunch. I noticed it sitting there the other day, next to my Apple //c which acts as a dumb terminal tied to my MacBook Pro when it occurred to me that I had an oldschool Mac mini-DIN 8 serial cable tucked in a drawer here…and that the PX-8’s RS-232C port is likewise a mini-DIN 8…. After a few minutes of hunting down pinouts on the web and sketching out a crude null-modem signal mapping by hand I pulled out the Swiss Army knife and started stripping cable. I was at work and had no soldering iron on-hand, so it was twist, twist, twist and time to cross the fingers. I connected the PX-8 to my USB-to-serial converter, opened an 80×8 terminal window in Mac OS X, issued the magic commands and voila!

It’s not a particularly ideal terminal — I don’t believe the system’s terminal app is even VT-52 compliant. Like the eMate 300 I put through the same drill, I don’t picture the PX-8 being a permanent fixture in the office. But hey, it was a fun way to spend lunch!

I hope you enjoy the photos.

This entry was posted in Other Platform, Serial Terminal. Bookmark the permalink.