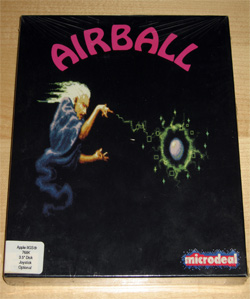 Most every day I take a look at the first few pages of auction items in eBay’s Vintage Computing area. There’s always interesting relics to be found, but it’s rare that a real treasure jumps off the page. Recently, I found such a treasure. Jason Harper was selling off his author’s copy of an action game he ported to the Apple IIgs known as Airball. This is how the auction item started off:

A long time ago, on a platform far, far away… I wrote an Apple IIgs version of MichTron/Microdeal’s popular Airball adventure game, which had also been ported to the Amiga and PC. It was this publisher’s only IIgs title; they had no idea how to market it, and gave up after selling only 144 copies. All I had to show for a few months’ effort was one pitiful royalty check, and two author’s copies of the game. I gave one of those to a friend long ago, the other one has been sitting on a shelf since then. It’s unopened, in the original shrink-wrap, although the top seam in the wrap has split open (actually, I think it might have been that way when I received it). It’s been years since I had a working IIgs system, and in all that time I’ve never even bothered to set up an emulator to run any of the software I wrote, so there’s obviously no point in holding on to this any longer.

This really jumped out at me for several reasons. First, Jason Harper was somewhat of a legend in the Apple IIgs scene for a variety of applications he wrote in the mid ’80s, most famous of which was SHR Convert (which later evolved into SuperConvert), an image conversion application that had to be the most popular piece of shareware ever written for the machine. Second, I’ve always loved the game Airball. I was an Atari 520ST user just before I got my GS and one of the best games for that machine was Airball from MichTron, a native ST title. Gameplay, graphics, music—it was all there. Several years later we saw a GS version floating around on the BBS’s, but it appeared in no ads, stores, or mailorder catalogs. The assumption was that a full port for the GS had been underway, but the project must have gotten scrapped before it hit market. As it turns out, this wasn’t quite the case.

I bid and won the auction for this game [ see box photos here: front, back ] and Jason was kind enough to answer a few questions I posed with regards to his work on this project:

Me: I can’t believe MichTron (Microdeal) rolled it out and did such a poor job of pushing it. Did they make any formal announcement at all?

JH: Not that I know of. I forgot to mention in the description that they later sold some copies to some IIgs dealer – Big Red Computer Club, maybe? (it’s been too long to remember.) I don’t know if those copies were part of the 144 that I actually got royalties for, by the time I heard of this that company had gone out of business.

Me: Would you mind telling me if it was a C or asm project?

JH: Assembly, both the original and the port (that was probably true of every arcade-style game of the era).

Me: Airball has a really nice audio track. Is the music identical to either the ST or Amiga version?

JH: It’s using the music data directly from the ST version – I have no idea if the Amiga version was the same, I never saw it. However, I ignored some note envelope data, as the music sounded identical to my ears without it (and it would have been a lot of work, and slowed the game down, to interpret that data).

Me: Any other comments you can give on the project, just for general interest?

JH: The only other major detail I remember is that the game ended up working quite differently internally than the ST version, due mostly to the rather different organization of pixels with the graphics memory on the two platforms. I did it their way at first, and the game was far too slow, so I rewrote it using a complete Z-buffer to handle the display of the airball that can be partially obscured by objects in the room. That turned out too slow as well, and the amount of work needed to speed it up would probably have been sufficient to fix the original method, but I was too committed to the Z-buffer approach by the time I realized that. The memory needed for the Z-buffer meant that the game couldn’t run on a 512K machine as the ST version could, but that probably would have been the case anyway since I was running the game under an operating system (the ST version booted directly into the game, and couldn’t be quit other than by a reboot).

I had such high hopes of porting their Time Bandits game as well. However, communication with MichTron was always difficult – they never seemed to grasp the fact that if I asked them a question, there was an implied request that they actually answer that question…

Me: Are you still coding these days?

JH: Yes, although mainly for microcontrollers (embedded systems) these days, along with the circuit design and printed circuit board layout needed to support that work.

It’s great to have had a few words with this GS developer of yore and also to have come into posession of so rare an artifact from that period. This is definitely one of the most prized items in my collection.

Airball exists for the Atari ST, Amiga, Apple IIgs, IBM PC, NES (never officially released), and the Gameboy Advance (unofficial port). The eBay auction item can be seen for the next 90 days or so here. To read the rest of Jason’s auction posting, which describes the game itself, click the link below.

The rest of Jason’s eBay posting is as follows:

As for the gameplay, you have been turned into a bubble by an evil wizard, and must explore his castle (shown in 3D isometric view) to find the items needed to restore yourself. Needless to say, the castle is full of pointy objects… Also, you’ve got a slow leak, and must find air pumps to keep yourself inflated (but don’t over-do it, or you’ll pop!). The game is somewhat non-linear in that you can freely choose between several branches off of the starting room, however each branch is then pretty much linear until you find the item at its end.

If I had to choose one word to describe the game, it would have to be “unforgiving”. You frequently have to make pixel-perfect moves and jumps among the many hazards in order to survive. Joystick control is available, but I can’t imagine anyone preferring that to the precision of number pad control. I never actually beat the game myself, although I could finish each of the branches individually.

The game music is pretty good for the era. The main theme music actually takes 7 minutes to repeat; it’s not the 15-second loop that I’ve heard in all too many games.

The game requires 768K, and an accelerator card is needed to play it at full quality. An alternate version is provided which omits some unnecessary animation, and will play at full speed on a stock machine.

And finally, a blurb from Jason Harper’s home page about his GS port of Airball:

Ported Airball, an arcade/adventure game for the Atari ST (also available for Amiga, PC, etc.) to the IIgs. The publisher (Michtron/Microdeal) gave up after one unsuccessful attempt at finding a distributor that would handle Apple II software, and sold a grand total of 144 copies. I’ve tried to track down who currently owns the rights to Airball, so that I could release the IIgs port I did as freeware. I’ve heard from Ed Scio (the original programmer), who has no objection to this, but unfortunately he isn’t sure exactly when the rights have reverted or will revert to him.