The Commodore One ( C-One )

As far as 8-bit computers go, I’ve always been an Apple II guy. I’ve owned 8-bit Commodores and Ataris, but they were never my “primary machines.” Despite this fact, I was impressed when, four years ago, I first heard of the Commodore One or C-One (or C1). In one respect, it’s sort of a “super” Commodore 64, but really it’s much, much more. At a glance, it’s a ~20MHz 65C816-based motherboard that uses CompactFlash as primary storage, has a PCI slot, a C64 cartridge slot, various C64 peripheral interfaces, a VGA connector, and two FPGAs that make it the distinctive “reconfigurable” computer that it is.

Just what is a reconfigurable computer? It works like this: a “core” file is uploaded into the FPGAs from a boot menu, at which point the FPGAs configure themselves to “become” the hardware described by the core. It’s like emulation—but in hardware, and the resultant machine is a clock-perfect replica of the target machine, unlike a traditional software emulator where there are unavoidable latencies inherent to the system. Currently there are three cores available for the C-One: Commodore 64, Amstrad CPC 464, and Amstrad CPC 6128. Many other cores can and will be developed for the platform. An Apple IIgs core is tentatively planned and, in time, a “native” core that will bring the C-One forth as a powerful, new 65C816-based computer will emerge. 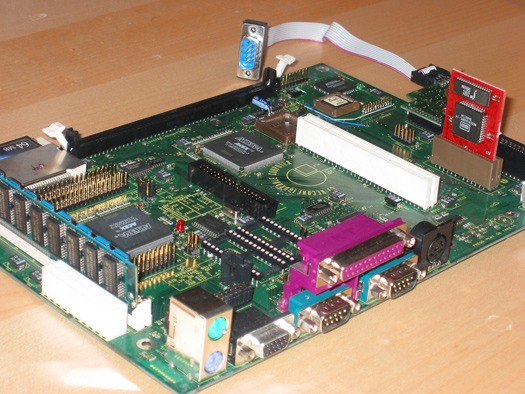 At any rate, after being intrigued initially with the C-One, I didn’t think much more about it (not being an 8-bit Commodore guy) until I read a recent Slashdot article about Jeri Ellsworth [ pics: 1 2 3 ] and her work on the popular C64-DTV, a Commodore 64 in a joystick. Jeri is also the designer of the C-One. The article got me once again fired up about the unique computing scene that is the C-One and this time I had to get on-board….

Just a few weeks ago I received my shiny new C-One motherboard (plus SilverSurfer serial module) from Germany and the best clear ATX case I could find (from Canada) and put them all together in what is perhaps my most unique setup to date (pics). As can be seen from the photos, all is functional and I have been busying myself with writing out disk images with the help of Star Commander and have begun setting up an actual C64 system in order to have a basis of comparison for the C-One’s emulation of the 8-bit Commodore platform.

The C-One has only been publicly avaialble for a short time, and as more units find their way into the hands of 8-bit afficionados, software that takes advantage of the C-One’s ability to stretch beyond the limitations of the target platforms will begin to emerge. How about a game that is in all ways a C64 application—but for its use of 256 onscreen colors? Or an application that makes use of the dual SID sockets on-board to output stereo retro audio goodness that rivals modern synthesizers? Other than faithful reproduction of beloved platforms, it is early to say in what ways the C-One will amaze. One thing is for certain, however: this is definitely one of the most intriguing computing platforms out there today. I will be verbose with all that I encounter as I head down this road with my new C-One computer.

This entry was posted in Commodore 64/128. Bookmark the permalink.

7 Responses to The Commodore One ( C-One )